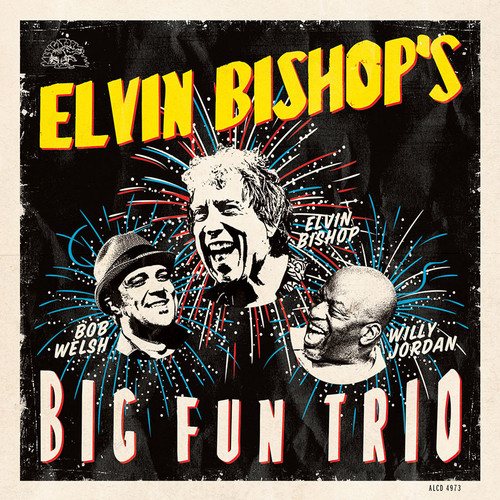 A lot has happened since guitar legend Elvin Bishop released his last album, 2014’s Grammy-nominated Can’t Even Do Wrong Right. He was inducted into the Rock And Roll Hall Of Fame, and soon after into the Blues Hall Of Fame. He won the Living Blues Award for Best Blues Album Of 2014 and three 2014 Blues Music Awards: Album Of The Year, Song Of The Year (for the title track) and The Elvin Bishop Band took the award for Band Of The Year. His new album – Elvin Bishop’s Big Fun Trio – is among his very best musical ideas ever. The music is rootsy, spirited and soulful, performed by serious musicians hell-bent on having a good time. Prior to the group recording a single lick, A Prairie Home Companion brought them onto the program in November 2015. Elvin Bishop’s Big Fun Trio features Bishop’s down-home delivery, deep blues picking and slide guitar, playfully meshing with Welsh’s piano and guitar licks and Jordan’s soul singing and propulsive cajón playing. The album’s laidback, front-porch vibe mixes four rollicking Bishop originals with three co-writes and five raucous, well-chosen covers. And because one can never have too much fun, Bishop’s pals Kim Wilson, Charlie Musselwhite and Rick Estrin stop by the sessions, each adding his distinctive harmonica talent (and in Musselwhite’s case, vocals too) to a song. Born in Glendale, CA on October 21, 1942, Bishop grew up on a farm in Iowa before relocating to Oklahoma when he was ten. He first got hooked on the blues listening to late night R&B radio as a teenager, and began collecting, listening to and absorbing blues music. Once Bishop realized that many of his favorite records were recorded in Chicago, he used his 1959 National Merit Scholarship as a way to get closer to his blues heroes by enrolling in the University of Chicago—its campus surrounded by dozens of black blues clubs. As a founding member of The Paul Butterfield Blues Band, Elvin helped create a groundbreaking band that introduced Chicago blues to the rock audience for the first time. With the release of East/West in 1966, the band's popularity hit an all-time high, paving the way for groups featuring multiple virtuoso guitarists, like The Allman Brothers Band and Derek and the Dominos. Towards the end of the 1960s, Elvin decided to move on, heading for the San Francisco area, embarking on a solo career. He recorded first for Fillmore Records, then Epic and then for Capricorn, where his career took off. He charted with Travelin’ Shoes before scoring big in 1975 with Fooled Around And Fell In Love (the song reached number three on the pop charts and was recently prominently featured in the blockbuster film, Guardians Of The Galaxy). After a seven-year recording hiatus, Elvin returned to his blues roots in 1988, signing with Alligator and releasing five albums between 1988 and 2000. Entertainment Weekly described Bishop’s music as “sheer, unpretentious joy.” After a few releases on other labels, Bishop returned to Alligator with 2014’s Can’t Even Do Wrong Right, and with it he once again turned the music-loving world on its head. Reviews poured in from NPR’s Fresh Air, Rolling Stone, Living Blues, No Depression and many others. He appeared on TBS-Television’s CONAN and performed twice on A Prairie Home Companion (the second time, in 2015, with the Big Fun Trio). He toured across the country, bringing his smile-inducing blues music to eager fans around the world. Now, with Elvin Bishop’s Big Fun Trio, Bishop confidently debuts his new -- yet satisfyingly familiar -- sound, ready to share the group’s happy-go-lucky vibe with listeners near and far. The trio’s instrumental, vocal and songwriting talents guarantee a boisterous good time. Living Blues says the music is “rousing, swaggering and rollicking.” In other words: Big Fun.