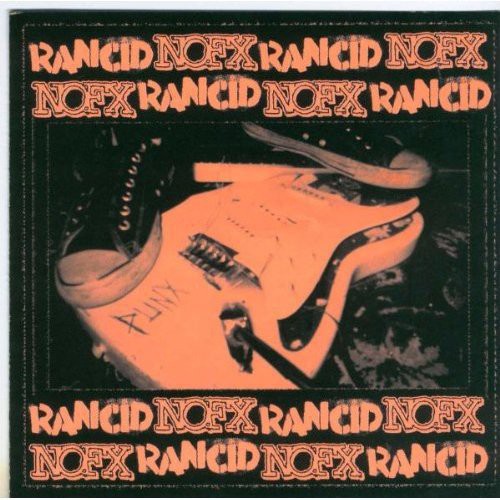 The Split Series began in 1999 with the idea of putting together a cohesive series of albums that would mark a place in time, conveying a felling and spirit that has, and always will, exist i the underground music music society. This 3rd Vol. Features two of the most infamous punk bands in the world, Rancid and NOFX. This twist on this one is the that each band has gone into the studio to record six of the other bands songs.

You might not figure two bands with pretty much the same approach—straightforwardSouthern California punk rock occasionally tinged with Jamaican skank—wouldhave new things to teach each other, but that theory goes out the window uponhearing this fierce double-header. NOFX have always balanced heart-on-your-sleevesincerity and slap-your-own-forehead silliness, so if their covers of six Rancidsongs aren't as emotionally complex as the originals, they make up forit by being more inventive than you might imagine. The highlight is "Radio,"which is transformed from a seething-joyful punk raver into the catchiest skanumber either band has ever put its name on, complete with a perfect organ lickcapping each verse. As for Rancid, their NOFX covers seem to cock an eyebrowat the listener and shred simultaneously. The exception is "Don'tCall Me White," which used to be NOFX's greatest song. It still is—butit's not NOFX's anymore.