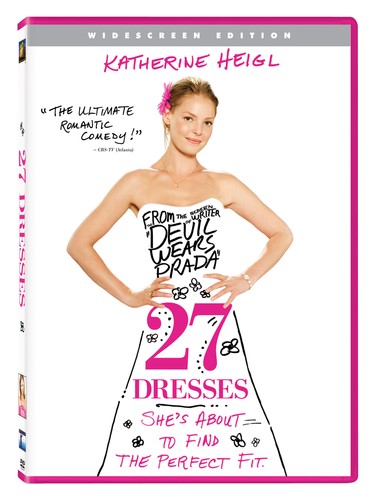 After serving as a bridesmaid 27 times, a young woman wrestles with the idea of standing by her sister's side as her sibling marries the man she's secretly in love with.

KNOCKED UP's Katherine Heigl stars in this romantic comedy about a selfless young woman who is trapped in the role of perennial bridesmaid. Set in New York City, the film opens with Jane (Heigl) racing by cab to appear in two friends' weddings in the same night. She is the maid of honor for both fetes, and she rushes back and forth in time to shimmy to both electric slides. She meets Malcolm (James Marsden), a cynical young man who, unbeknownst to her, writes for a newspaper's wedding column. Malcolm is intrigued by the sheer number of times Jane has played bridesmaid, and he secretly decides to write a story about her. To further complicate Jane's life, her younger sister Tess (Malin Akerman) has just come to town and ensnared Jane's longtime crush, George (Edward Burns). When George and Tess become engaged, Jane faces the humiliating prospect of playing bridesmaid in the wedding of her sister and the man she loves. Meanwhile, Malcolm continues hounding Jane, and Jane's life and closet soon explode in a taffeta-tangled mess that forces her to make some big changes.Heigl is a pleasure to watch, as she has the kind of crowd-pleasing, no-nonsense presence that could ground any film, so 27 DRESSES greatly benefits from her comedic skill and charm. While the film features all of the hallmarks of chick flick fare (wacky best friend, dress-up sequence, obnoxious but strangely attractive love interest) the story often veers into territory that may leave some feeling it stretches even the romantic comedy standards for suspension of disbelief. Heigl deserves comparisons to Julia Roberts for her sheer likability, and like PRETTY WOMAN, women will likely watch 27 DRESSES when it runs on cable--aware of the fantasy, but still delighted by the attractive lady in the different outfits.