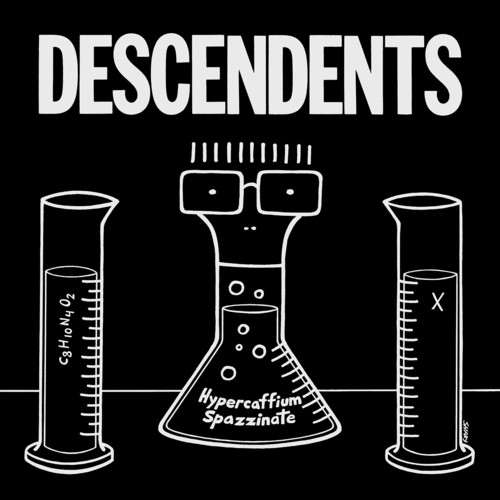 On their first album in 12 years, vocalist Milo Aukerman, drummer Bill Stevenson, guitarist Stephen Egerton, and bassist Karl Alvarez channel an energy just as raw and jittery as in their earliest days—a time when the band was driven by the equally mighty forces of “rejection, food, coffee, girls, fishing, and food.” Born from the all-for-one spirit that’s forever fueled the band, Hypercaffium Spazzinate returns to the frenetically catchy sound that launched a generation of pop-minded punk acts and continues to widen the Descendents’ following around the world. The band’s first Epitaph Records release since 1996’s Everything Sucks, Hypercaffium Spazzinate began taking shape soon after the Descendents surfaced from extended hiatus for a series of gigs in 2010. With Milo now living in Delaware, Karl and Bill in Colorado, and Stephen in Oklahoma, the album came to life over a three-year period in which the band sent tracks back and forth and occasionally met up in Karl and Bill’s adopted hometown of Fort Collins. With Hypercaffium Spazzinate featuring the classic Milo cartoon as its cover art—this time, he’s got his head affixed to a lab flask in an attempt to “synthesize some bonus caffeine,” as Milo explains—the album finds the band both honoring their past and living fully in the moment. “Since the dawn of rock-and-roll every band’s tried to pretend they exist in the age group of 18 to 35, no matter how old they get,” says Karl. “But this band’s very honest about the fact that we’re not teenagers anymore.” Still, thanks in part to their enduring legacy within skate culture and punk communities, the Descendents maintain a vitality that’s amply reflected on the new album. “Each time we make a record it’s almost like the first time all over again,” says Bill. “There’s a quote from Ornette Coleman about how the song is the territory, and what you do with the song is the adventure. We’re definitely still going on all these little adventures together.”