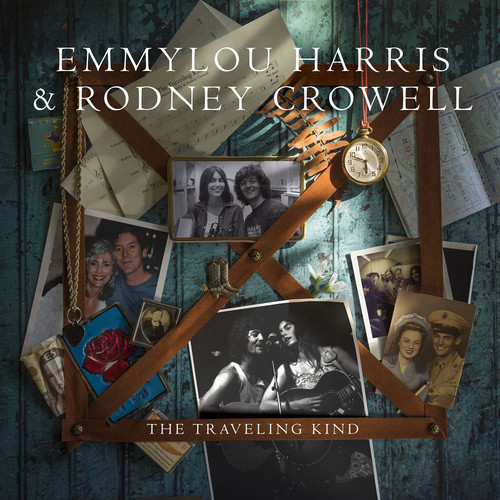 The Traveling Kind follows the longtime friends' first duet album, 2013's Old Yellow Moon, which won Best Americana Album at the 56th annual Grammy Awards as well as two awards at the 2013 Americana Music Association Honors & Awards Show, for Album of the Year and Duo/Group of the Year. The album also debuted at #4 on the Billboard's Top Country Albums chart.

Produced by Grammy Award winner Joe Henry (Billy Bragg, Elvis Costello, Aimee Mann), The Traveling Kind comprises 11 duet tracks, including six new songs written by Harris and Crowell with co-writing by Mary Carr, Cory Chisel, Will Jennings, and Larry Klein. Also featured are new renditions of previous Crowell cuts including "No Memories Hanging Around" as well as new interpretations of Lucinda Williams' "I Just Wanted to See You So Bad" and Amy Allison's "Her Hair Was Red."

Of the project, Harris comments, "In the words of Willie Nelson, 'The life I love is making music with my friends,' and there's no better friend for me to make music with than Rodney. I can't wait to get out there on the road with him and play the songs from this new record."

Crowell adds, "Emmy and I wrote six of the eleven songs on The Traveling Kind, which was recorded in a six-day span with our Glory Band, Steuart Smith, and Billy Payne. Joe Henry was at the helm as producer and Justin Neibank did the recording. The experience was pretty much akin to falling off a log."