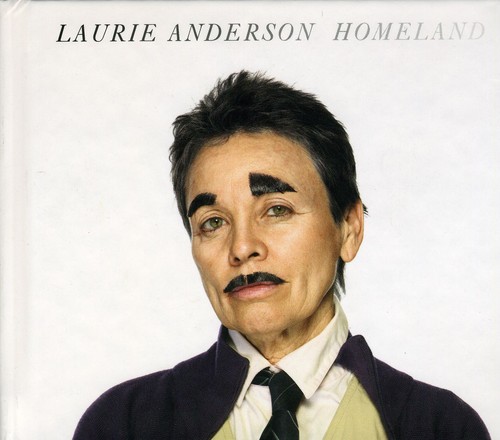 'America is a good place for stories,' Laurie Anderson told London's The Guardian right before she brought 'Homeland,' her self described 'concert poem,' to English stages. 'Homeland' contains some of Anderson's most incisive work, -- darkly humorous, starkly emotional, and, at times, movingly tender. Her stories are once again about these United States of America, the sprawling subject that first brought her acclaim more than 25 years ago with her eight-hour Reagan era phantasmagoria, 'United States, Parts I - IV.' 'Homeland' is a distilled, up-to-the-minute portrait of our agitated nation, its politics, its economics, its delusions and its dreams. Her tone is less outraged than elegiac, mourning for lives lost, ideals misplaced. The music is dramatically stripped down to a handful of players, centered around Anderson's haunting violin and voice, frequent Bill Frisell band-mate Eyvind Kang's viola and Peter Scherer's keyboards. The arrangements are embellished with such touches as the siren-like vocals of Antony Hegarty (of Antony and the Johnsons), thumping keyboards from Keiran Hebden (of Four Tet), and, on the brilliant, wickedly funny 'Only An Expert,' a gnarly guitar turn from Anderson's husband and co-producer Lou Reed.
This website uses cookies to personalize content and analyse traffic in order to offer you a better experience.
I accept Learn More
back to top