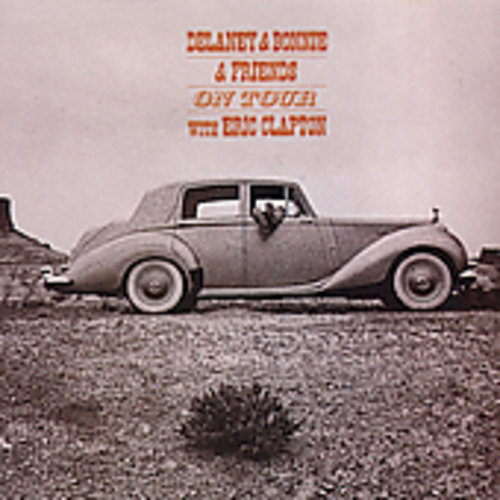 On Tour W/Eric Clapton
Artist: Delaney & Bonnie
Format: CD
New: Not on Hand, let us get it for you...
Wish

Out-of-print in the US! On Tour with Eric Clapton is the third album by Delaney & Bonnie Bramlett, and their first on the Atco/Atlantic label (catalog no. SD 33-326). Released in June 1970, this album features Delaney and Bonnie's best-known touring band, including Eric Clapton, Jim Gordon, Carl Radle, Bobby Whitlock, Leon Russell, Dave Mason, and George Harrison (under his pseudonym "L'Angelo Misterioso"). Many of the players on this album would later go on to work with Clapton on his solo debut and on Layla and Other Assorted Love Songs, and with Harrison on his vocal debut album All Things Must Pass. The album's cover photo, taken by Delaney and Bonnie's manager Barry Feinstein, was reportedly shot in 1966 while Feinstein worked as a photographer covering Bob Dylan's British tour. Dylan's feet are alleged to be those hanging from the car window.