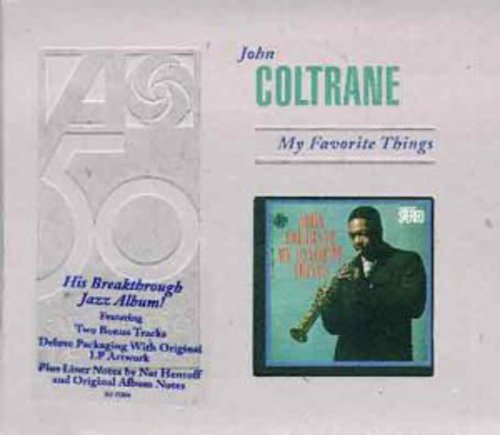 My Favorite Things (deluxe Edition)
Artist: John Coltrane
Format: CD
New: Not on Hand, let us get it for you... Used: Available In Store
Wish

An essential LP from Atlantic's extensive jazz catalog, this classic title has been given the star-treatment (complete original album and liner notes, plus additional tracks, rare photos and more) in celebration of the label's historic 50th anniversary. The deluxe reissue of Coltrane's timeless My Favorite Things album showcases the 4 original tracks, plus both parts of the "My Favorite Things" single version!

''My Favorite Things'' is a 1961 jazz album by John Coltrane. It was the first session recorded by Coltrane on the Atlantic Records label (as SD-1361), and the first to introduce his new quartet featuring McCoy Tyner (piano), Elvin Jones (drums) and Steve Davis (bass) -- neither Jimmy Garrison nor Reggie Workman featured as yet.

The album was also the first to quite clearly mark Coltrane's change from bebop to free- and modal jazz, which was slowly becoming apparent in some of his previous releases. It introduces complex harmonic reworkings of such jazz standards as "My Favorite Things" and "But Not for Me". Additionally, at a time when the soprano saxophone was little used in jazz, it demonstrated Coltrane's further investigation of the instrument's capabilities.

The standard "Summertime" is notable for its upbeat, searching feel, a demonstration of Coltrane's 'sheets of sound', a stark antithesis to Miles Davis's melancholy, lyrical version on ''Porgy and Bess'', and makes use of offbeat pedal points and augmented chords. "But Not For Me" is reharmonised using the famous Coltrane changes, and features an extended coda over a repeated ii-V-I-vi progression.

The title track is a modal rendition of the Rodgers and Hammerstein song "My Favorite Things" from ''The Sound of Music''. The melody is heard numerous times throughout the almost 14-minute version, and instead of having a solo over the written chord changes, both Tyner and Coltrane taking extended solos over vamps of the two tonic chords, E minor and E major. Tyner's solo is famous for being extremely chordal and rhythmic, as opposed to developing melodies. In the documentary The World According to John Coltrane, narrator Ed Wheeler remarks:

<blockquote>"In 1960, Coltrane left Miles [Davis] and formed his own quartet to further explore modal playing, freer directions, and a growing Indian influence. They transformed "My Favorite Things", the cheerful populist song from 'The Sound of Music,' into a hypnotic eastern dervish dance. The recording was a hit and became Coltrane's most requested tune—and a bridge to broad public acceptance."</blockquote> - Wikipedia