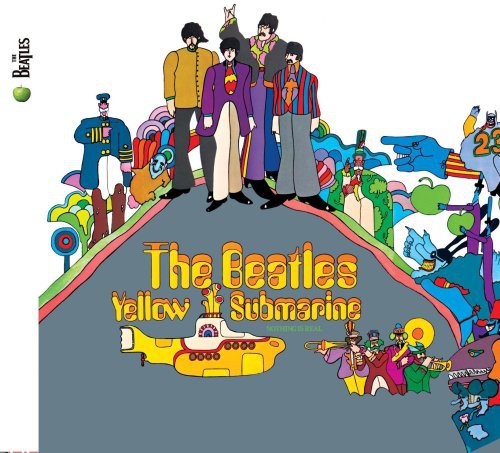 Starting out as a sing-a-long vehicle for Ringo Starr on REVOLVER, "Yellow Submarine" became the inspiration for the 1968 animated feature film of the same name. Most of the soundtrack was composed and orchestrated by George Martin, but the remaining six songs were far from being Beatle cast-offs. George Harrison's two contributions, "Only A Northern Song" and "It's All Too Much" mark the adventurously experimental phase the Beatles were in at that time and dabble in woozy psychedelic shadings laced with orchestrations that continued to influence cutting-edge pop artists for decades to come. Along with the aforementioned "Yellow Submarine," other Lennon/McCartney compositions include the good-time, skiffle-flavored "All Together Now," the Lennon-driven rocker "Hey Bulldog," and "All You Need Is Love"--the unofficial flower-power anthem.

The classic original Beatles studio albums have been re-mastered by a dedicated team of engineers at Abbey Road Studios in London over a four year period utilising state of the art recording technology alongside vintage studio equipment, carefully maintaining the authenticity and integrity of the original analogue recordings. The result of this painstaking process is the highest fidelity the Beatles catalogue has seen since its original release.

Within each CD's new packaging, booklets include detailed historical notes along with informative recording notes. For a limited period, each CD will also be embedded with a brief documentary film about the album. The newly produced mini-documentaries on the making of each album, directed by Bob Smeaton, are included as QuickTime files on each album. The documentaries contain archival footage, rare photographs and never-before-heard studio chat from The Beatles, offering a unique and very personal insight into the studio atmosphere.