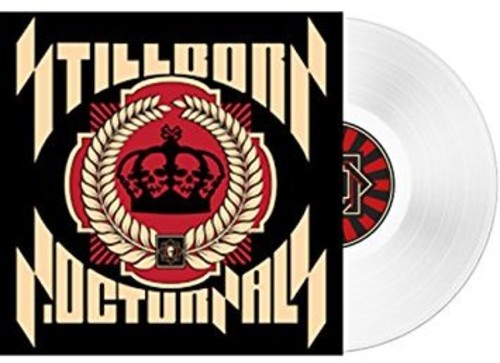 Limited white vinyl LP pressing. 2017 release. In 1989 the Swedish band Stillborn released an album called Necrospirituals. Today it's seen as a cult classic and probably the first gothic metal album ever made. In fact, the term gothic metal was not even invented at that time. However, it's far from what today could be labeled as gothic metal. The one who managed to best describe the band is probably the signature Zodijackyl at the Metal archives: "Stillborn meld the gloomy horror film origins of doom metal with the morbid aesthetics of gothic rock and create something special.." Although the band is relatively unknown to the vast majority, it has influenced important artists such as Paradise Lost, Entombed and Cathedral. During 2016 and 2017, the band's original members got together and recorded 10 new songs (47 min) in the spirit of their debut Necrospirituals. The songs were recorded and mixed at studio Juicy Halftone in Copenhagen by Henrik Stendahl. The band are also planning to do a reunion tour in the autumn of 2017. On their new album Nocturnals, the band has refined their sound and style even more but old fans will still recognize the original essence of Stillborn. The lyrics are still sinister and eerie with a subtle twist. The music is loud, sturdy, dark and heavy as a monolithic stone. Since the band announced that they will play again and giving hints that they will release a new record, they have received a very positive response. Many fans have contacted them to tell how excited they are.