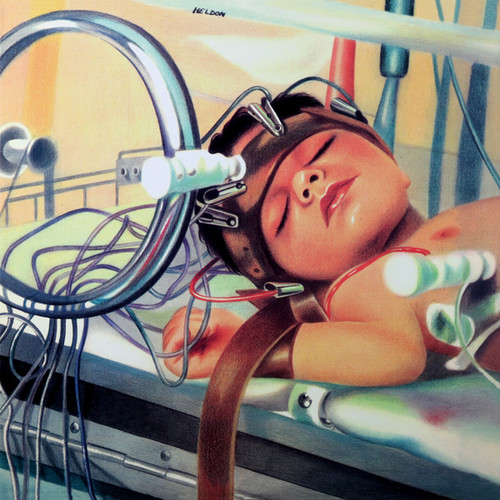 Bureau B present a reissue of Heldon's fourth album Agneta Nilsson, originally released on Urus Records in 1976. Agneta Nilsson opens with a mind-paralyzing track that proves stillness can have a pulse. "Perspective I" spends ten minutes poring through tectonic layers of heavy sound, piling everything so thick that the song becomes like quicksand for your brain. It's one of the most daunting works in the Heldon catalog, made all the more impressive by how simple it is. It's just sounds put together and turned up. It's the vital alchemy of Richard Pinhas's wizardry, deployed with maximum force. As on other early Heldon albums, the rest of Agneta Nilsson is diverse in a nearly contrarian way. Each track refuses to mimic it's predecessor in a way that feels rebellious, like a child running away from home. This is true despite the fact that three of the four pieces are actually chapters of "Perspective", partners in a thematic whole. "Each one is a different point of view on the same field," explains Pinhas. "Different parts, different arrangements, but with a full concept in place." It's not easy to divine that concept in these pieces, but their sibling nature has a subconscious effect. The album-closing "Perspective IV" is one of Pinhas's most unabashedly proto-prog guitar-hero epics, boosted by a technical upgrade. "This was the first album where I had enough money to rent one or two days in a real studio to do the drumming," says Pinhas. "After that we had real budgets for studio time. That all changed with and after Agneta Nilsson - that was a good turn." Pinhas parlayed Heldon's change of direction into three more adventurous albums in the '70s, and simultaneously spurred himself toward a solo career that continues to prod and probe the sonic universe today, over 40 years since he began. It would be wrong to say this album was the big bang of this singular career; the seeds of were planted years before, and every work Pinhas has been involved with sprouts more sounds and ideas that can grow into their own branches. But Agneta Nilsson is one of the most convincing pieces of evidence that Pinhas is incapable of sitting still. 2018 remaster by Willem Makkee.
back to top