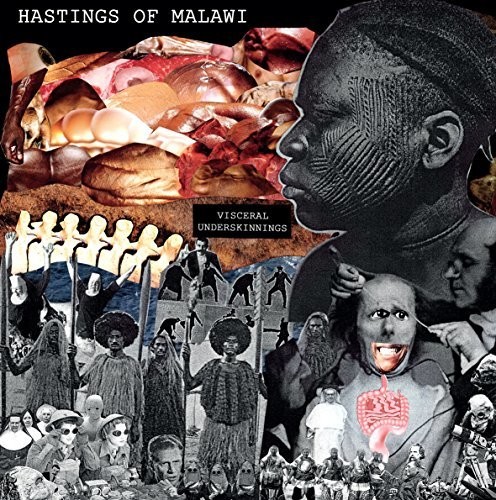 35 years after the release of their critically acclaimed 1981 album, Vibrant Stapler Obscures Characteristic Growth (SR 428LP), the British dadaist group Hastings Of Malawi release their second album, an epic sound poem entitled Visceral Underskinnings. It is a 40-minute film without light that reflects on the human condition, on modern society, on the nature of telephony and electricity and an attempt to make sense of the world in which we live that provides no answers. It is a sound collage of diverse elements including the voices of George Washington Johnson ("the whistling coon", 1846-1914) and Dr Hastings Banda, the first president of Malawi. It includes randomly generated computer music, voice synthesis, recordings of cold war number stations, American military sound weaponry, and recordings of the some of the many sound sculptures produced by Hastings Of Malawi over the last 30 years. Hastings of Malawi produce sounds that sit in that grey area where sound art and music meet but they reject both labels and cannot be comfortably placed in either camp. This is not an easy album to listen to, but persevere and you may or may not be able to decipher it's meaning. "Rarely has an album so consistently made me question what the actual fuck is going on," is how the Wire magazine described Hastings Of Malawi's first album Vibrant Stapler Obscures Characteristic Growth and the second album makes things no clearer. If you are a fan of the tedious, peurile, repetitive beats that populate the insipid sonic environment that is popular music today, you probably won't like this album. Assembled with no regard for musical convention, Hastings Of Malawi follow their own rules and have created another fascinating journey into their world which makes it no easier to understand our world. Apparently, the Chinese voice that starts the second side of the album translates as "the deaf mutes have so many intimate words they want to share with you" and this perhaps sums up what Hastings Of Malawi are trying to do with Visceral Underskinnings. Another musique concrĂ¨te jewel created with the same peculiar, disjointed, uncommercial, and totally original Hastings Of Malawi aesthetic. Limited edition yellow vinyl.