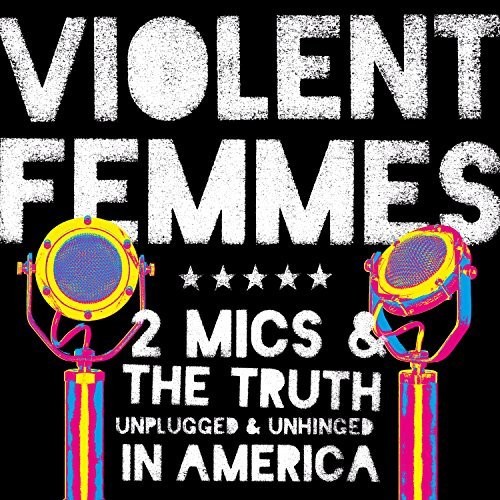 2017 release from the alt-rock veterans. Two Mics & The Truth: Unplugged & Unhinged In America is the legendary '80s folk-punks' follow up to last year's critically acclaimed, 'We Can Do Anything'. All of the songs on Two Mics, including iconic favorites such as "American Music" and new hits like "Memory", were recorded during sessions at various radio stations across the country. Violent Femmes came together in 1981 and were quickly applauded as one of the most inventive and original bands of the era, constantly pushing forward with their singular blend of folk and punk, sarcasm and spirituality. The Milwaukee-based band first attracted attention while busking in front of their hometown's Oriental Theatre. The performance caught the ears of that night's headliners, Pretenders Chrissie Hynde and the late James Honeyman-Scott, who invited the young group to open the sold out concert with a brief acoustic set. From there Violent Femmes released eight studio albums and more than a dozen iconic singles. Violent Femmes' remarkable three-decade-plus career has earned them cumulative worldwide sales in excess of 10 million, with 1983's Violent Femmes awarded with RIAA platinum certification eight years after it's initial release.