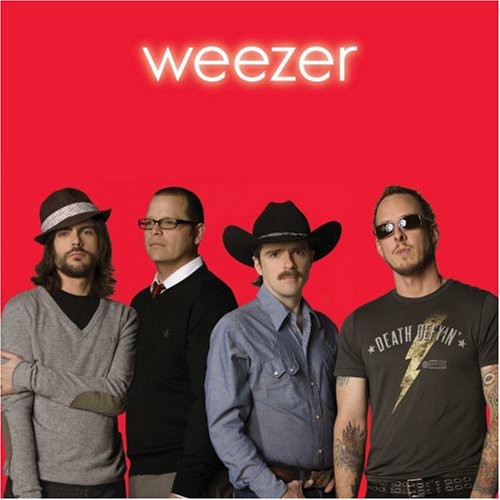 Weezer: The Red Album
Artist: Weezer
Format: CD
New: Not on Hand, let us get it for you... Used: Available In Store $5.99 Buy
Wish

Weezer, one of the biggest and most influential bands of the last decade, will for the third time in its six-album history, release a self-titled album, already being referred to as The Red Album. Comprised of sessions produced by Rick Rubin, Jacknife Lee and the band itself, the album is adventurous and undeniable Weezer pop rock.

''Weezer'', also known as "The Red Album", is the sixth studio album by the American alternative rock band Weezer, released on June 3, 2008. Rick Rubin and Jacknife Lee both helped to produce the album. Like the group's 1994 debut album ''Weezer'' (and unlike most Weezer records that featured Rivers Cuomo as the main songwriter and vocalist), other band members contributed to songwriting. This is the first Weezer album to feature lead vocals from all band members.

The video for the album's first single "Pork and Beans" quickly became the most-watched video on the internet the weekend following its release. Additionally, an unconventional Hootenanny Tour replaced the traditional rock concert tour to promote the album. The sales of ''Weezer'' are below that of its 2005 predecessor, ''Make Believe'', which was certified Gold (500,000 copies) after the same amount of time ''Weezer'' took to sell 300,000 copies. - Wikipedia

Everyone got what they asked for in 2001'"after a long hiatus, Weezer finally followed up 1996's massively influential Pinkerton with their second self-titled full-length, known to fans as The Green Album. And with that, Rivers Cuomo and crew (conspicuously minus Rentals founder Matt Sharp) entered a new period of productivity, snapping off three new albums in just four years. Sadly, 2005's mixed bag Make Believe seemed to be the end of the road for the nerd heartthrobs, as breakup rumors abounded. Operative words: "seemed to be." While Cuomo was placating the masses with his demo comp Alone late last year, the band was getting down to the business of this sixth (also S/T) record. And Pinkerton enthusiasts should rejoice: The Harvard (front)man claims that songs will be less rote than the pop-rock nuggets of Weezer V.2. Of course, we all dug three-minute shout-a-longs like "Hash Pipe," but any time Cuomo is compelled to challenge us and himself, bonus.