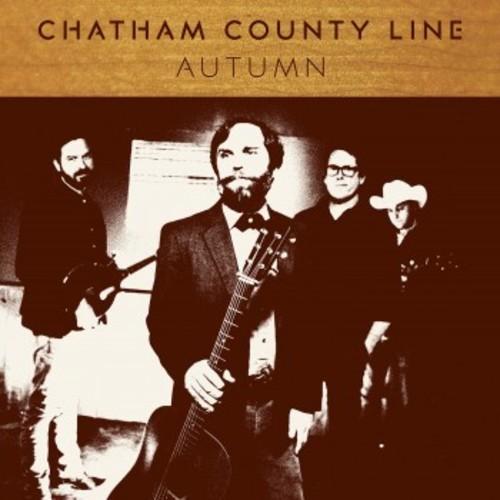 Autumn
Artist: Chatham County Line
Format: CD
New: Not on Hand, let us get it for you...
Wish

"Our band is a lot like this place," says Chatham County Line guitarist, lead singer and songwriter Dave Wilson. His eyes wander across the original hardwood lanes of the mid-century Raleigh bowling alley where he just finished rolling and drinking two rounds. Playing traditional string band instrumentation around a single microphone while clad in suits and ties visually projects a similar sepia-toned timelessness. "We create a product that you're familiar with and you'll enjoy going back to because you know what to expect. My dad ran a local hardware store years ago and I always felt like we shared that."

Sure enough, like a small town store, there's no dramatic tale or sexy hook to fuel the hype machine for Autumn, the seventh studio album since the Raleigh, NC-based Chatham County Line - Wilson, John Teer (mandolin/fiddle), Chandler Holt (banjo), and Greg Readling (bass, pedal steel, piano) - coalesced in the late 1990's. Instead, the story behind the workmanlike group's newest release - available September 2, 2016 via Yep Roc Records - is simple: A veteran ensemble at the top of its game sticking to its considerable strengths - poignant songwriting and inventive acoustic arrangements that draw upon a broad array of American roots influences, highlighted by trademark three- and four-part harmonies that shine throughout.

"We were so obsessive about the way Tightrope sounded and making sure we got the songs right that this record was kind of a 180 from that," Wilson explains, referring to the meticulous, multi-year process that birthed Autumn's predecessor. "I think we were all exhausted from that process and wanted to just take the songs I had written and record them." Thanks to the more casual approach, Autumn marries the comfortable maturity of 2014's Tightrope with the welcome spontaneity of Chatham County Line's earlier work. Though the year between sessions wasn't dedicated to consciously working on the record, it was perhaps the most productive period for the songs to take shape, according to Wilson. "It's like leaving your desk and taking a walk: You have your best ideas when you re not working on what you're supposed to be working on."