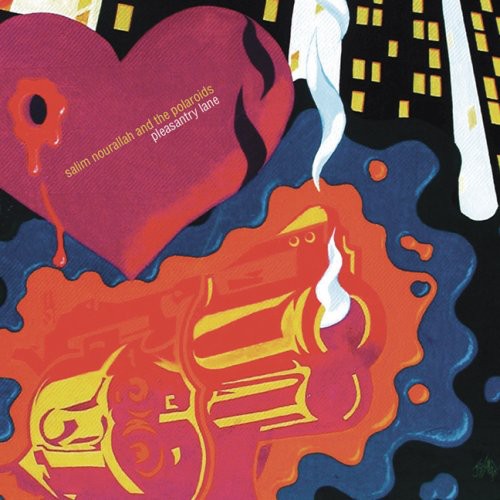 Since the year 2000, Salim Nourallah's music has consistently garnered critical accolades, including being the inclusion of Polaroid in The Dallas Observer's Top Five Albums of 2004, and the double disc reissue of Nourallah Brothers (2004) being lauded by KCRW's Eric J. Lawrence, as one of the top ten cds in the last decade. Moreover, the reissue debuted on KCRW in their top 30, and was the only small label release to make that illustrious list. This praise heads a long list of critical and popular appreciation, as evidenced when Nourallah played SXSW 2004 to a packed club, for his professional debut of Polaroid. 2006 found Nourallah's albums licensed in Germany and a tour of Europe followed. The Dallas Observer once again honored Nourallah with Best Album (Beautiful Noise), Best Song ('The World Is Full of People Who Want to Hurt You'), and Best Producer. Much of Nourallah's solo work has been created and recorded at his own studio, Pleasantry Lane (a veiled reference to another lesser known studio). Since the commercial opening of the studio at the beginning of 2004, Pleasantry Lane has been a recording nexus for such disparate yet talented folk as : Rhett Miller, Old 97s, Deathray Davies, Earlimart and the Damnwells. Undoubtedly, Salim's focus for the last half of 2004 was creating and recording his recent opus, Beautiful Noise. This pensive, finely wrought collection reveals Salim brooding on themes of mortality, aging, lost love and, refreshingly, hope as an antidote to despair. His keen pop sensibilities shine through in this meditative song cycle, in songs such as "Montreal", a McCartney-esque anthem to the joys of coupledom and "The World Is Full of People (Who Want to Hurt You)" a ballad filled with fatherly worries and love. In this work, Salim widens the thought-provoking territory of Polaroid, and reaches the depths of any listener's emotional resonance. On Pleasantry Lane, Nourallah gathered his band, The Polaroids (John Dufilho: drums Jason Garner: bass Meri Knoll: keyboards), for a live in-studio session that gathered together songs not only from his solo albums, but also from his Paisley Pop debut EP 'A Way to Your Heart' as well as the Nourallah Brothers. BIOGRAPHY: Born in Alton, Illinois, the eldest child of Fayez and Karen. Salim's mom was an art major, his dad an accountant. In 1970, the family moved to El Paso when Salim was just 3. When Salim was 9, he saw the Beatles' 'White Album' in Kmart and got his grandmother to buy it for him. The album changed his life. When Salim was 16, he started writing songs. His brother Faris was the only one who believed they were worth a crap and started playing drums. Salim played guitar. Faris sold his car for a drumkit then moved to guitar, and Salim moved to bass. The family then moved to Denton, which Salim hated. Salim and Faris made Nourallah Brothers in 1999 on an 8-track then quit playing music together. Faris released 3 solo CDs, while Salim released two (Polaroid and Beautiful Noise) plus one 6-song EP called A Way To Your Heart.