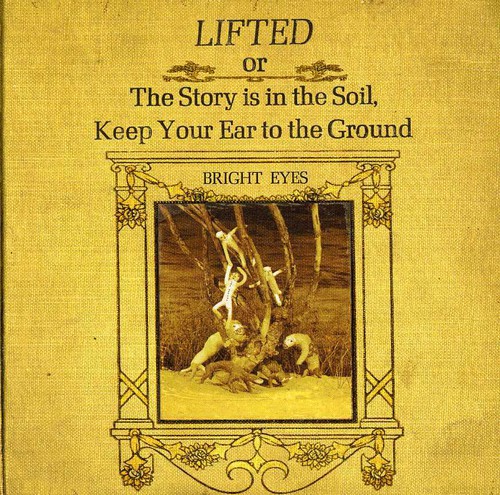 Lifted Or The Story Is The Soil: Keep Your Ear To The Ground
Artist: Bright Eyes
Format: CD
New: Not currently available
Wish

''Lifted or The Story Is in the Soil, Keep Your Ear to the Ground'' is the fourth album by Bright Eyes. This album is the 46th release of Saddle Creek Records. The band made its national television debut in support of the album, performing "The Trees Get Wheeled Away" (a track that was not on the album) on ''The Late Show with David Letterman''. - Wikipedia

But overlook Oberst's ego-make no mistake, he's so puffed uphe needs burping-and, on the third Bright Eyes full-length, you just mightbe in for a surprise. Granted, a handful of numbers on this lengthy disc areroom-clearing exercises in sub-Janovian folk-angst; trim about 13 minutes andyou'd have a tidy hour. From that hour's set, then, pluck tunes suchas "False Advertising" (a gorgeously ramshackle, fully-orchestratedcarnival pop-waltz), "Lover I Don't Have to Love" (draped increepy/scratchy Wu-Tang atmospherics, it's noirishly cinematic) or "MakeWar" (woozy/twangy Giant Sand-meets-Jayhawks country-rock) and witnessan unveiling of talent that was only hinted at on previous records. Oberst tapsa huge pool of Omaha talent (including members of The Faint, Cursive, AzureRay and Now It's Overhead) to sonically flesh out his thick lyrical narrativesof melancholia, moral corruption and unrequited love, each song laid out asa discrete short story-complete with illustrations-in the booklet.That in itself is indicative of either ambition or pretension. Most likely,both. Still, are ambition and pretension automatically wrong if the end resultis so bountifully musical?
back to top