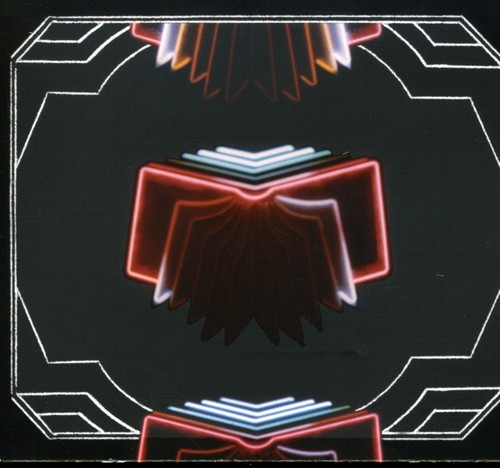 Neon Bible
Artist: Arcade Fire
Format: CD
New: Not on Hand, let us get it for you...
Wish

The eagerly anticipated second album from Montreal's Arcade Fire exceeds all expectations. With string and orchestral arrangements by the band's own Owen Pallet and Regine Chassagne, Neon Bible is full of both half-assed punk rock mistakes and meticulously orchestrated woodwinds.

''Neon Bible'' is the second album by Canadian indie rock band Arcade Fire, released in March 2007 on Merge Records. Originally announced on December 16, 2006 through the band's website, the majority of the album was recorded in a church that the band bought and renovated.

''Neon Bible'' became Arcade Fire's highest charting album at the time, debuting on the ''Billboard'' 200 at number two, selling 92,000 copies in its first week and more than 400,000 to date. Being released within a month of similarly successful releases by The Shins (''Wincing the Night Away'') and Modest Mouse (''We Were Dead Before the Ship Even Sank''), ''Neon Bible'' was cited as an example of the popularization of indie rock. Critics offered the self-produced ''Neon Bible'' mostly favorable reviews. Publications like ''NME'' and IGN praised the album for its grandiose nature, while ''Rolling Stone'' and ''Uncut'' said that it resulted in a distant and overblown sound. - Wikipedia

These Canadians had a stranglehold on Best Actual Album For Those Of You Non-Philistines Who Prefer Art To Crappy Disposable Singles until those no-good Radiohead bastards decided to steal their thunder in October. Well, we've got the Fire's backs, all seven to 10 of them, depending on the night. And "the night," as in any time they play live, is a big part of why the band has converted so many indie folk to hand-clapping, prostate believers. Playing on the uncomfortable intersection of faith and commerce, Neon Bible provided power couple Win Butler and RĂgine Chassagne with an excuse to drag a huge-ass pipe organ all across North America, not to mention a wildly talented supporting cast wielding all manner of obscure instruments. "Intervention" and "Keep the Car Running" held their own as singles, but like acclaimed predecessor Funeral, gave the most in context of the full album. If you haven't given in already, you probably just haven't seen them yet. Before they were betrayed by the press that built them into the Next Big Thing, 'And You Will Know Us by the Trail of Dead were renowned for their versatility in switching instruments and roles onstage. Still enjoying a comparable wave of hype, Sufjan Stevens gets mad love for breaking out everything short of a didgeridoo in his distinctive mix. No strangers to fawning kudos, Montreal's Arcade Fire bring the entire pawn shop to their live shows and records, and 2004's David Bowie-approved Funeral was bar none the indie sensation of that year. Frontman Win Butler, no stranger to grandeur, opted to produce this sophomore effort in-house, adding a pipe organ and Hungarian orchestra to the mix. So while too many cooks doesn't appear to be the issue so much as, y'know, too many ingredients, the early results sound more than palatable. "Black Mirror" shuffles along like a gem from a Michel Gondry soundtrack, while "Intervention" puts that pipe organ to supersaturated use. Prepare for your headphones to burst into flames' if the bloggers don't beat you to it.