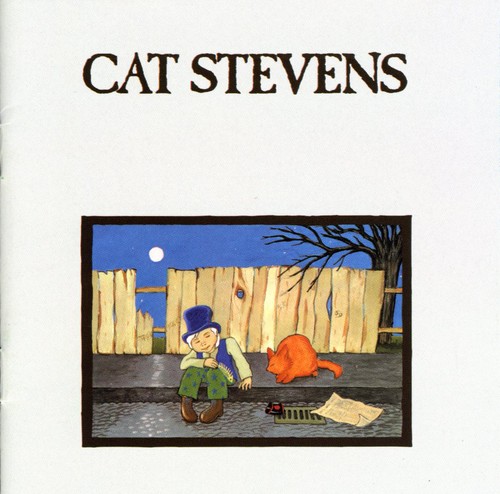 2000 remastered reissue of the singer/songwriter's 1971 fifth album. Produced by Paul Samwell-Smith (the Yardbirds, Jethro Tull, Amazing Blondel) It contains some of his most popular songs including "Morning Has Broken," "Moonshadow," & "Peace Train". All were hits in the USA. Stevens also released a children's book that he wrote & illustrated himself. The story features the title characters from the album cover, top-hatted young Teaser and his pet Firecat, who attempt to put the moon back in it's place after it falls from the sky. An animated version of the story, narrated by Spike Milligan, was also produced.

''Teaser and the Firecat'' is an album released by Cat Stevens in 1971. It contains 10 songs including hits such as "Morning Has Broken," "Moonshadow," and "Peace Train." It is also the title of a children's book written and illustrated by Cat Stevens. The story features the title characters from the album cover, top-hatted young Teaser and his pet Firecat, who attempt to put the moon back in its place after it falls from the sky. Published in 1972, the book has been out of print since the mid-1970s.

The album was a commercial success, surpassing the heights achieved by Stevens' previous album, ''Tea for the Tillerman'', reaching both the UK and US Top 3 and also spending an impressive fifteen weeks at the top of the Australian charts, becoming the biggest-selling album of the country in 1972.

In 1977 an animated version, narrated by Spike Milligan and using the song Moonshadow, was a segment in Fantastic Animation Festival.

In November 2008, a 'Deluxe Edition' was released featuring a second disc of demos and live recordings. - Wikipedia