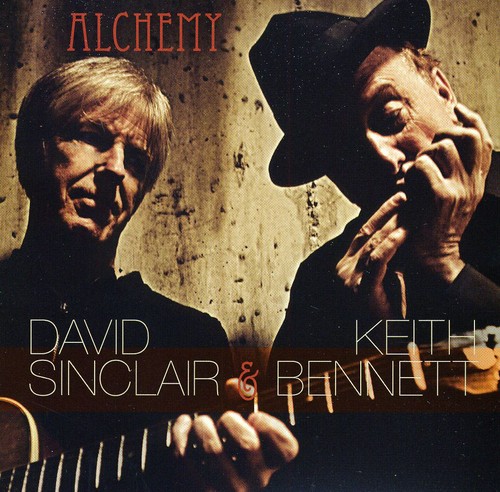 On the urging of mutual fans, David & Keith did their first concert together in the spring of 2010, a sold-out event in Deep Cove BC. The response was so amazing that they were eager to continue, and have since done a series of concerts throughout BC, and again encouraged by fans, have recorded a studio CD and a DVD of one of their concert performances. Rocking instrumentals, featuring David's percussive acoustic guitar playing and Keith's soaring chromatic harmonica are mixed with vocal tunes featuring both David and Keith. The style is a rootsy blend of blues, jazz and folk, both David and Keith have extensive backgrounds as solo artists, sidemen and studio musicians, and bring their wide range of skills to the duo. As well as chromatic and blues harps, Keith incorporates some specialty harps and his excellent guitar playing into the mix, resulting in an incredible variety of sounds from just two guys. Their new CD/DVD is a mix of instrumentals and vocals, blues, folk and jazz, originals and a few favorite covers. The DVD was recorded live at a recent concert in Parksville BC by Raines Broadcasting Corp., the audio CD is studio-recorded. Keith Bennett has played on hundreds of CDs, TV and filmscores, performed recently with Supertramp in Calgary and was a finalist in the 2010 World Harmonica Championships in Germany. His melodious harmonica playing has been featured with the Vancouver Symphony Orchestra, and for eight years he was featured as the 'Harmonica Man' at NHL Vancouver Canucks home games. As a singer, he has recorded several CDs and appeared in theatre productions as a singer/actor. David Sinclair has toured extensively in North America, Europe, and Japan as a member of both Sarah McLachlan's and k.d. lang's bands. As a studio guitarist, he has worked with artists including Sarah McLachlan, Amy Sky, Michael Buble, Daniel Powter, Gary Fjellgaard, Rita MacNeil, Valdy, Susan Jacks, Terry Jacks, BTO, and was guitarist and vocalist with CBS recording bands Straight Lines and Body Electric, composing several Canadian hits. His Acoustic Christmas CD was among the "top 5 all time Christmas recordings" on the Vancouver Province 2008 list. Exerpt from a recent newspaper article: Master guitarist David Sinclair and harmonica virtuoso Keith Bennett have recently joined forces and are performing to sellout crowds across B.C. Their unique jazz, blues and folk arrangements entice their listeners on a personal voyage of emotion and energy. Their instrumental mastery is mind blowing, their lyrics evoke vivid images and their seamlessly blended vocal harmonies provoke stirrings from the soul. Sinclair has played with the likes of Sarah McLaughlan and k.d. lang, and Bennett with Supertramp's Roger Hodgson and the Vancouver Symphony Orchestra.
This website uses cookies to personalize content and analyse traffic in order to offer you a better experience.
I accept Learn More
back to top