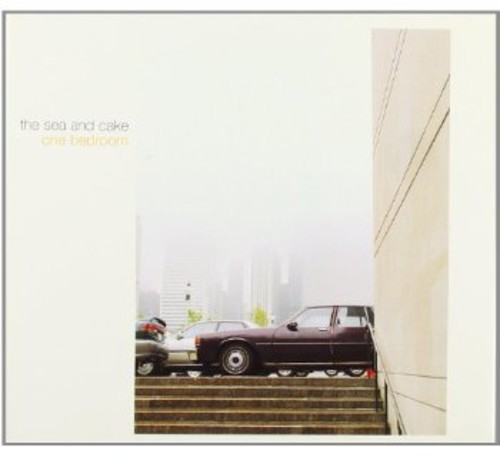 Their first reocrd in over two years finds them as innovative and vibrant as ever. Cutting guitar notes, melodic propulsive and rhytmic drumming, swirling synthesizers and distinct vocals that float in and out. While there are moments of transcendental bliss, the record reatins an overall pop element throughout. Includes the Bowie cover "Sound And Vision" with the Aluminum Group.

Even minus the strings that put the marzipan frosting on Oui, their previousThrill Jockey release, One Bedroom finds Sam Prekop, Eric Claridge, JohnMcEntire, and Archer Prewitt gliding resolutely ever deeper into the land ofthe lush. But that's to be expected at this point. The Sea and Cake seemso determined in their quest for tonal color that one can't help but imaginethat they could take up rubber bands, pie pans, and maybe a kazoo and stillend up with the musical equivalent of a little enchanted rainforest right inthe middle of Wicker Park.

One Bedroom offers color to spare, but it's when they embrace the funkthat the quartet attains maximum eloquence. And embrace it they do, withoutfalling back on ubiquitous neo-Gang of Four gestures, going anywhere near theblackface jar, or venturing into Steely Dan tribute territory.

Instead, with a few simple, elegant gestures, they somehow manage to evoke anentire constellation of big-brim behemoths—from Carl Douglas of "KungFu Fighting" fame, to the BB&Q Band—in small doses at first, andvery subtly. Only halfway throughout the album, on the breezy, Earth, Wind andFire-flavored "Shoulder Length," do they crank the sonic sunroof allthe way open. And their cover of David Bowie's "Sound and Vision,"itself a thinly-veiled copy of George McCrae's "Rock Your Baby,"radiates a strain of pure pimp power so potent, it could make even John Ashcroftthink about getting a nice little platinum coke-spoon necklace.
This website uses cookies to personalize content and analyse traffic in order to offer you a better experience.
I accept Learn More
back to top